This Is Biden's America

Trump supporters held a rally in Washington DC on November 14. After the rally violent Democratic Party supporters attacked some of them

In one instance, a man was continuously harassed and assaulted with smacks to the head by two violent totalitarian women as he left the rally. Other Democrats harassed him as he continued trying to walk away. As he continued walking the harassment increased. The man then became angry at the constant attacks and turned toward the totalitarian Democrats and pushed them back. The photo below shows a communist then sucker punching the man in the back of the head knocking him out. Two other violent  women then stomped on his head while he lay on the ground. 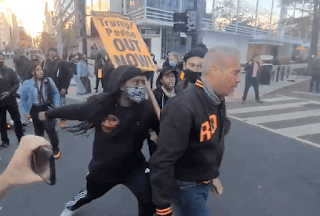 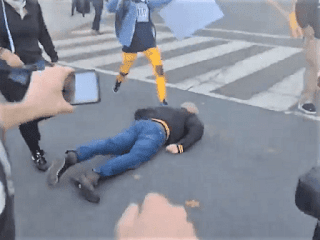 Meanwhile other Democrats began attacking another nearby Trump supporter. That supporter managed to run thru the totalitarians and fled the area.
Yet another group of Biden supporters harassed a women with two children.  She had attended the Trump rally. The violent communists then attacked a man who was trying to help her. A video of the  attack by Democrats' can be seen below.

A fight just broke out as anti-Trump protesters began to follow a black pro-Trump woman walking through BLM plaza with her children. One person was detained — One of the little girls began to cry after the altercation pic.twitter.com/uxSvhDStSQ

This is what the Democratic Party represents. Violent totalitarians who think that they should control people.

This is Biden's America. Voting for Biden is the same as voting for intolerance and violence.

Two left wing racist reporters at CNN recently marginalized the non  Black population of Philadelphia. The reporters were discussing President Trump's claim of voter manipulation in Philadelphia and Detroit. The CNN reporters stated the president singled out these city's because they are black. A video of the racists appears below.

Most people in Philadelphia are not black. A full 60% of the city is either white, Asian or Latino

Whats clear is that both of these ignoramuses are incapable of judging people on the basis of their actions. To both of them, a person is only a skin color.

Left wing bigotry is a growing problem throughout the media.  The racists at CNN show that it is becoming deeply ingrained in their culture.

Philip Anderson had organized a free speech rally in San Francisco. There was a communist counter protest organized by Antifa.

The Marxist were angry and yelling at the free speech attendees. Anderson tried to assist one man walking thru the left wing counter protesters trying attend the free speech  As they walked through the crowd, an Antifa member came up from behind Anderson and punches him in the face. Anderson recoils from the hit and holds his ear and jaw. A few seconds later, the the Antifa member moves in again and punches Anderson in the mouth knocking out his two front teeth.  A woman in the background from Antifa can be heard taunting Anderson,  "Cry about it. Cry about it.”  A video of  the incident is shown here.   (Note: Click 'VIEW' at right on the tweet to see video) .

Additionally, Antifa members can  be heard screaming the “N” several multiple times and yelling many obscenities.  Both Anderson and the man he was helping escape the left wing attackers by climbing over a police barricade.  Another video of the Antifa assault can be seen here.

Anderson managed to speak at his rally but Antifa interrupted it and shut it down. Police deemed the area no longer safe due to the violent communist group and escorted the attendees away from the area.

Anderson then  tweeted,  “Antifa attacked me for no reason. These people are racist terrorists." He latter defiantly tweeted a message to former Vice President Joe Biden "I have a question for you, Joe Biden,”“Do you still think Antifa is just an idea? This is what the ‘idea’ you’re talking about, Antifa, this is what they did to me.”  “I want you to answer that question, Joe Biden,”

This is an example of why Section 230 should be revoked for Twitter. Its not a community platform.

The New York Post published email evidence  presidential candidate Joe Biden lied when he said he’s never spoken to my son about his overseas business dealings. The emails indicate Biden abused his power as vice president when he  pressured government officials in Ukraine into firing a prosecutor who was investigating an energy company called Bursima. Biden's son, Hunter, was on the company's board and being paid $50,000 a month  even though he had no  energy sector experience and doesn’t speak any of the languages spoken in the Ukraine. (Note: Currently Google is blocking direct links to the New York Post article.The title of their story is: Smoking-gun email reveals how Hunter Biden introduced Ukrainian businessman to VP dad ).

In 2018, Joe Biden bragged to the Council on Foreign Relations about how he got that prosecutor fired. He said: “I looked at them and said: I’m leaving in six hours. If the prosecutor is not fired, you’re not getting the money. Well, son of a bitch. He got fired.”

Facebook, Twitter, ABCNews and MSNBC, supressed the New York Post evidence. They were trying to limit the spread of information and shield their political Party from inconvenient questions.

MSNBC reporter Kyle Griffin stated "No one should link to or share that NY Post 'report'. MSNBC reporter Hallie Jackson labeled the NY Post a source "tabloid" claiming its an unreliable.  ABCnews refused to report the story.  Twitter began blocking users from sharing or sending the New York Post article. They also locked the New York Post's Twitter account.  Facebook announced that it would be “reducing distribution” of the story  on its platform so that it could limit the number of users who could read it.

Facebook and Twitter have special protections that traditional media sites do not. They have the protection of Section 230. That legislation states "No provider or user of an interactive computer service shall be treated as the publisher or speaker of any information provided by another information content provider."

Section 230 was intended to give everyone an outlet to voice their opinion on a platform that could be easily accessed. Each individual would be responsible for their own views, The community platforms they voiced these views on would not be held liable in a court of law. However, Facebook and Twitter have shown they are not community platforms. Instead, they are platforms promoting far left propaganda. The two organizations regularly suppress information that is damaging to socialism or detrimental to left wing political candidates. Everyone CANNOT voice their opinions on these platforms. Twitter's chief executive, Jack Dorsey, is an admirer of the Soviet system of censorship.

The American media suppresses information based on its political agenda.  They act totalitarian. They behave similar to tyrant governments in China, Cuba Venezuela and the old Soviet Union.

Evidence of Media Bias and Fraud

A recent broadcast of MSNBCnews is an example of media bias and fraud. Their analyst said any potential violence in Louisville as result of police officers not being charged with murder in the Breonna Taylor case would be from white nationalists.

"I’m not going to get pissed or do any sort of performative tears or rage or anything like that. And yet today, I can’t help it. I’m so disgusted by this. I’m so disgusted by Daniel Cameron’s performance. I am so sick and tired of black people going on the air and performing for violence and white supremacy and state-sponsored violence against black people and claiming their mamas, and because of black people, they care about it. This woman got shot in her house! When she was asleep! ”

None of the violence is from white nationalists. There were only violent left wing rioters. Additionally, the biased MSNBC reporter  refused to mention the fact an investigation into the case found police knocked on Taylor's door and announced their presence. Someone in the apartment then fired at the officers. Police initially said it was Breonna's boyfriend who fired. However, her boyfirend claimed it was Breonna who fired at police.  The news organization casually omits inconvenient facts.

Another example media lies is CNN's 'fact checking'. During the September presidential debate, Trump stated he stopped all incoming travel from China in January as a result of the coronavirus. Trump then said to his oponent  Joe Biden  “I closed it, and you said, ‘He’s xenophobic. He’s a racist, and he’s xenophobic’ because you didn’t think I should have closed our country.”

CNN fact checked Trump's  claim about Biden's statements. The news organization ruled  the claim as' dubious'. CNN said “It’s not clear Biden even knew about Trump’s China travel restrictions when he called Trump xenophobic on the day the restrictions were unveiled; Biden has never explicitly linked his accusation of xenophobia to these travel restrictions".

Yet on March 18th,  when Trump tweeted, “I always treated the Chinese Virus very seriously and have done a good job since the beginning, including my very early decision to close the borders from China — against the wishes of almost all. Many lives were saved. The Fake News new narrative is disgraceful & false!” Biden responded, “Stop the xenophobic fear-mongering. Be honest. Take responsibility. Do your job.”

Nearly two months after the ban, Biden was still calling it xenophobic. CNN's 'fact check' was a lie. The news organization will tell any lie if they believe it will help their political party gain power.

In another example of media lies, an ESPN reporter stated: "a big percentage of (the protests) that wasn’t peaceful is actually … extremist right-wing agitators posing as protesters in order to make the protests look bad.” Its widely known that Antifa is a violent left wing group. They have attacked people throughout the country particularly in Seattle and Portland. Additionally, BLM founders state they are trained Marxist.  Here is video evidence of left wing violence.

A final example is New York  Times columnist Thomas Friedman.  The longtime advocate of a socialist police state appeared on CNN’s “Anderson Cooper 360, Friedman stated: “Anderson, you know, I began my career as a journalist covering Lebanon’s second civil war and its history. And I’m terrified to find myself ending my career as a journalist covering America’s potential second civil war in its history.” Yes, I think what happened in the last few days is a six-alarm fire,”  “I think it’s DEFCON 5. The President of the United States has told us either I win the election, or I delegitimize the election.

Freidman is promoting his own political agenda. Trump never said he wouldn't concede under any conditions. THAT WAS HILLARY'S CLINTON'S RECOMMENDATION TO HER PARTY'S PRESIDENTIAL CANDIDATE JOE BIDEN. She said "Joe Biden should not concede under any circumstances,"  Freidman's own political Party is beginning to mimic totalitarian factions such as Venezuela's United Socialist Party  or Cuba's  Communist Party.

The left wing media has no problem lying to the public. Their main interest is promoting their political agenda. Undermining democracy and encouraging divisiveness is their main goal. Most news organizations in the US are totalitarian socialists. They want democracy replaced by a system of government where they can control people.